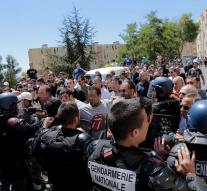 Tourists had photos taken on a beach where some Muslim families were swimming. One of the girls said in the company to a group of young people became angry because women were photographed in BURQINI's. The quarrel degenerated into a mass brawl in which four people were injured. Three cars were set on fire.

In the city of Bastia volunteered Sunday about five hundred angry citizens to the office of the prefect. They called inter alia,, to arms 'and tried to walk where many people live North African origin to a neighborhood. The police blocked the road.


Vivoni mayor hopes to avoid boerkiniverbod that tensions rising in the village. He says to protect Muslim women. The ban will take effect Tuesday.