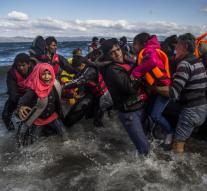 athens - After the capsizing of a boat carrying refugees Greek fishermen and members of the coast guard rescued 242 drowned. The major rescue operation off the coast of the island of Lesbos went deep into the night between Wednesday and Thursday through, reported the public broadcaster ERT.

In the accident of the wooden boat came Wednesday three people, including two children, were killed. Many rescued women and children had to be treated in a hospital on Lesbos as a result of hypothermia. It is not clear whether there are drowning not be saved.

The accident with the boat is possible due to the bad weather in the region. The weather is stormy days and would remain so.