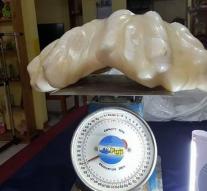 - A fisherman has a giant pearl, probably the largest pearl ever found, ten years kept under his bed. He was under the assumption that the 34 kilos shiny object brought him luck.

However, he was not aware of the huge pearl could make him rich. The pearl, which is five times as large as the largest pearl that has been found so far, is $ 100 million worth.

The fisherman found the jewel in the Philippine island of Palawan coast during a storm. The anchor was stuck, and the fisherman into the water plunged. At the bottom he saw the huge shell, Philippine media reported.

When the man ten years later was forced because of a fire in his wooden house to move, he brought the pearl to a tourist office in Puerto Princesa. 'We were amazed,' says an employee, indicating that the jewel will remain in the Philippines 'to attract tourists.

Pearl is still being tested for authenticity, although nobody doubts. The second largest pearl, the Pearl of Allah was also found in Palawan in 1934. This jewel is on display in New York.