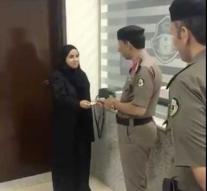 riyad - Women in Saudi Arabia experience a historic day. The first driving licenses were handed out to women on Monday. In fact, they will only be able to get behind the wheel in the conservative kingdom from June 24, the Saudi channel al-Arabiya reports.

On images you can see how the first woman gets her driving license. Women over the age of 18 can go to driving schools in five cities. They can, among other things, receive lessons from Saudi women who have obtained their driving license abroad.

Allowing women to drive a car is part of the progressive reforms that Saudi Crown Prince Mohammad bin Salman wants to implement. The aim is to lower the threshold for women to participate in the labor market.