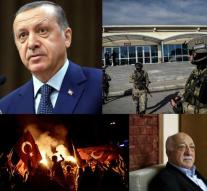 istanbul - Under tight security on Tuesday on the outskirts of Istanbul, the first trial started against people suspected of an attempted coup. In mid-July failed a bloody coup in Turkey was mainly committed by policemen and soldiers.

Erdogan claims that the coup attempt was the work of his great rival, the Islamic scholar Fethullah Gülen. Gulen has lived long in the US and claims to have nothing to do with the coup. Erdogan has labeled as terrorist supporters. There are estimates since the attempted coup of July 15 more than 40. 000 arrested because they were Gülen supporter.

Starting Tuesday are 29 police officers who would rightly belong to the Gülen movement. Among the defendants are 21 hanging overhead a life sentence, according to the Turkish newspaper Hürriyet.