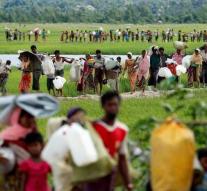 rangoon - Myanmar has repatriated on Saturday the first five of the almost 700,000 Rohingya refugees who stayed in camps in Bangladesh. Last week, a senior UN official said that conditions in Myanmar were not favorable for repatriation.

Bangladesh and Myanmar concluded an agreement on the return of refugees at the end of last year. It was agreed that repatriation would begin in January and last two years. Myanmar wants to build new villages for the returnees in the vicinity of their original houses, which have been destroyed by the army.

The agreement garnered criticism from human rights organizations and the UN, who believe that refugees should return voluntarily. Also under Rohingya the agreement is controversial, because repatriated refugees do not get citizenship, but only an identity card.

The Muslim Rohingya fled their homeland after security forces had acted with great violence following attacks by Rohingya insurgents in the state of Rakhine last summer.