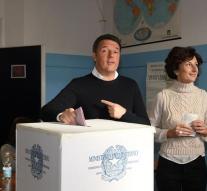 - The first results of the referendum in Italy are not expected in the night from Sunday to Monday. The polling stations are open until eleven o'clock Sunday night.

The deployment of the referendum is a series of major revisions to the Constitution. The outcome is binding. The Social Democratic Prime Minister Matteo Renzi has indicated that he is resigning if the Italians vote against the proposal. Renzi voted Sunday morning with his wife Agnese Landini Pontassieve, a town near Florence.

There were about twelve hours no turnout figures available.