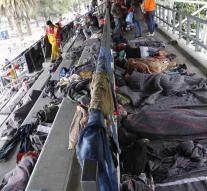 mexico city - The first migrants of the procession on their way to the United States have reached the capital of Mexico on Sunday. There they are temporarily taken care of in a stadium. More than a thousand migrants could receive medical help and the kitchens were set up by the government.

In Mexico City, the migrants are still about 800 kilometers from the border with the US state of Texas. Four weeks ago they left Honduras, out of dissatisfaction with poverty and violence in their homeland. Thousands of people have joined the march.

The American president Donald Trump has repeatedly called on migrants to return because they say they 'waste their time' and will not be admitted to the US.