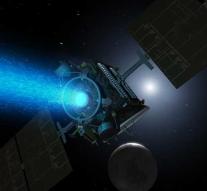 houston - Shortly after the Kepler space telescope, the United States loses a second scout. The Dawn space probe is without fuel and does not work anymore.

The Dawn was launched in 2007. He researched the large rocks Vesta and Ceres. They stand between Mars and Jupiter and run in orbit around the sun. The research had to teach scientists more about the origin of our solar system. Unlike the earth, the rocks never developed into real planets.