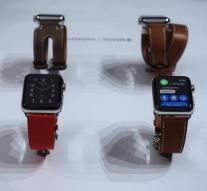 - With much fanfare, Apple has unveiled its latest gadgets weather: iPhone 7 and 7 Plus, the wireless AirPods headphones and the new version of Apple Watch. Luckily there was also time to take the gadgets already in use here. Is it what?

At first glance the different Series 2 is not as much of the original Apple Watch. In appearance he is in fact almost the same. Admittedly, there is a ceramic version now, but the shape and weight is almost identical to that of its predecessor.

The real innovations are under the hood. For example, the Watch now includes noting a faster processor, and that falls directly upon use. Apps load much faster than for example to 'old' Watch and ensures that they generally are suddenly much more useful. Although I carry the current smart watch Apple's every day, I almost never use apps because its load so painfully lasts long. With version 3 operating system WatchOS this is already remedied a bit, but on the new watch the difference is even more noticeable.


In addition, a GPS receiver is now integrated. This makes the gadget itself may be accurate location tracking without having to bring a paired iPhone. Useful for runners who want to take no phone, but still want to collect a lot of data about their journeys. How reliable it is, however, was not to be tested during the event, so necessary for a judgment on the matter is still some additional work.

Finally, the Series 2 is water resistant to 50m. This allows you the device during the swim wear and can also track how many laps you swim and how many calories you burn for example. Again, it was not really test; there was no pool hidden behind the podium.

All in all, the Series 2 looks like a worthwhile upgrade from Apple's smartwatch. Especially noticeable faster processor really shows what additional processing power can mean a lot. For the rest of the new features we have to wait for a more extensive review.


Then the gadgets where it was really going to do: the iPhone 7 and iPhone 7 Plus. As with the new Watch differences in appearance, the two are not very much of their older brothers apart from the dual camera on the rear side of the Plus.

Because although the iPhone 7 also has an improved camera- so it finally has optical image stabilization- is the Plus version which contains some really exciting: two 12 megapixel cameras on the front. The difference lies in the lens: one with a wide angle lens, while the other has just one remote. The data entering combine both cameras, it is possible to zoom up to 10 times without great quality. And perverse: when shooting some pictures in the test room is striking how far the range of the camera now reaches. This addition will convince a lot of people to take instead of a 'small' 7 a 7 Plus.

Another striking piece of news is the new home button. This is no longer physically really depressing, but vibrates when you touch him hard enough. It feels very weird if you're used to using a simple button. Anyway, among other things, this is to make it waterproof device. That's a weird sensation worth button.

Oh yeah, and you had already heard that no headphones opening more in the unit? 'This plugin takes too much space' said Apple chief executive Phil Schiller during the presentation, and so he had to give. A headset must now either wireless or connected via the Lightning connector. Fortunately, Apple provides An adapter to the phone so you can still use your trusty headphones, so it made a small guide to the owners of expensive ear plugs / ear flaps.

As the only real hope is that everyone buy the wireless AirPods (á € 179 per pair). Also i can test here and to be honest: here you can see the old Apple ingenuity very well. Anyone who has ever paired a Bluetooth device to an iPhone knows that it can be quite a tinkering. If not with the AirPods press a button on the cover of the earbuds and they appear directly on screen on the phone. With one press of a button they work suddenly in conjunction with all devices that your Apple account is logged. That means iPhone but also iPad or Apple Watch. Incredibly simple.

With earplugs as the earpods AirPods and it is always very personal and they are good or not. When they fit me fine, but of course must use longer tell whether they are really comfortable and secure fit.

Geinig is further that both caps are fitted with a sensor to 'see' whether they are also in the ear or not. Gives you a clear out, then the music stops immediately and will only resume when it is reinserted. Finally, voice assistant Siri be accessed by tapping twice on a AirPod. In my case, both worked fine features, though I have heard from colleagues that it was not working smoothly.

Sound wise the first impression was quite good, but I have heard only one song (Sia). The earbuds sounded balanced- not too deep bass and not too much emphasis on the treble. Anyway, how headphones deals with other genres, is questionable and I will come back later on in a comprehensive review.