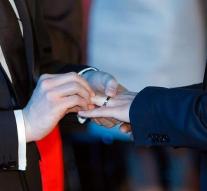 rome - Throughout Italy this weekend held the first 'marriage ceremonies' for homosexual couples. people of the same sex can now enter into an officially registered partnership due to new legislation. Italy is the latest Western European country where it was completely impossible until now.

The center-left government of Prime Minister Matteo Renzi defied the objections of conservative Catholics and gave gay couples in many respects the same rights as heterosexuals. For example, they may assume another's name and inherit from each other. But in other areas, such as adoption, stricter rules apply, write Italian media. A marriage is officially no.

Franco (82) and Gianni (79) from Turin was Saturday,, the happiest day of their lives. ' The two are more than half a century together, and were among the first couples who used the newly acquired right.