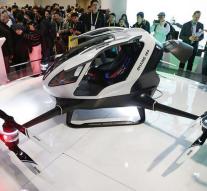 - The first drone who is authorized to carry a man for test flights in the US state of Nevada.

Authorities have given permission according to CNN for trying the Chinese EHang 184, a large drone with a cabin for a passenger.

Drone which was beginning to admire this year in Las Vegas at CES technology fair. The device displays via the navigation system by where he's going. There is no driver and no remote driver.

The company says it will use the commercial flights.