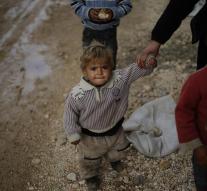 aleppo - The first convoy of sick and wounded Thursday morning actually went on the road from eastern Aleppo to the west of the Syrian town. Thus seem the agreements made during the night of Wednesday to Thursday between the regime in Damascus and the rebels to work.

This time it was the Shiite Hezbollah, which fight in, on the side of President Assad, announced that the implementation of the evacuation is going well. 'The militants in the east of the city are transported to Touman Khan', was one announcement.

The Kremlin confirmed the retreat and said Syria guarantees the safety of the rebels. Khan Touman is a village southwest of Aleppo.

The confusion between the ruins of the largest city in the country remains high. Exactly 24 hours ago failed a similar agreement on a cease-fire and the evacuation of civilians and rebels at the last minute.