Home / World / First commercial flight between the US and Cuba 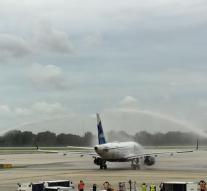 - A unit of US company JetBlue Airways on Wednesday made the first commercial flight between the US and Cuba in more than fifty years. The flight is the result of the rapprochement between the countries, which for decades have lived in discord.

Several US airlines begin in the coming months with regular flights between the two countries. The Airbus 320 JetBlue departed Wednesday from the city of Fort Lauderdale in Florida and landed in Santa Clara. That city is known for the monument to the freedom fighter Ernesto 'Che' Guevara.

On board the aircraft were some dignitaries and journalists, as well as regular passengers.

Mario Martinez flies with his wife and children with the first flight to Cuba to visit family.