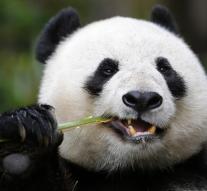 toronto - A giant panda from China, gave birth Tuesday in the Zoo of Toronto, Canada, with two baby pandas. There Shun mother , which was loaned by Beijing, and her two offspring are doing well , says the Toronto Zoo. It is the first time that giant pandas were born in Canada .

The three are monitored constantly as a precaution in the coming weeks. If they survive , they probably remain , according to the zoo for two years in Toronto. Then they probably go to China .