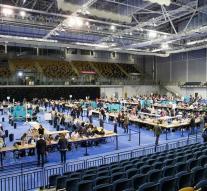 - The people of Gibraltar would remain no doubt in the European Union. The overseas territory of Great Britain was the first district with the result and chose as expected in overwhelmingly 'continue'. The turnout was 84 percent.

chose only 823 of the inhabitants of the southern end of the Iberian Peninsula for a Brexit. 19322 voters opted for a longer stay in the EU. The outcome in Gibraltar says nothing about the voting behavior of the other British. A recent poll showed that 52% want to stay in the EU.

UK polling stations are at 22. 00 pm local time (23. 00 pm Dutch time) closed. Who at that time standing in line could still vote in the referendum on whether to remain a member of the European Union.