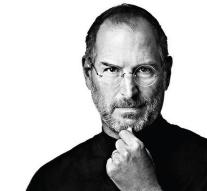 Page Six reports that the share of the trash is fished by an anonymous Apple employee. The framed document had hung in the office of the deceased Jobs in 2011. In 1985, however, Jobs was fired by then-Apple CEO John Sculley.

Jobs would be left in such a hurry that he left his personal belongings. Sculley gave them the task to clean up the office, where the stuff Jobs ended up in a garbage can. The anonymous Apple employee fished share however out there. Why the worker did not return to Jobs when he returned to the company is unclear.