Home / World / Fires back at Jungle of Calais 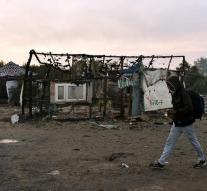 - The evacuation of the migrants camp 'jungle' in Calais has entered the third day. Which began early in the morning again with ritual burning of tents and shacks. Also some gas cylinders exploded.

A church official told France Info that one person was slightly injured. 'The operation continues and we are trying to empty shelters to clean up as quickly as possible to prevent them from being ignited. '

Late Tuesday night said Fabienne Buccio, the prefect of the department of Pas-de-Calais, the migrants repeatedly asked to start a fire. 'They do it anyway. It's part of the tradition. The fire remains in the area to monitor the safety and to prevent the spread of fire. '

So far, more than four thousand inhabitants of the jungle 'transferred to reception centers elsewhere in France. There remains little more than two thousand stragglers.