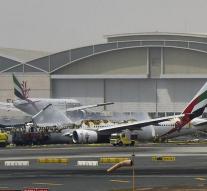 - In extinguishing the aircraft had caught fire at the Dubai Airport is a firefighter killed. That said, the director of airline Emirates on Wednesday.

The device was left Thiruvananthapuram in India. According to Emirates, there were 282 passengers and crew on board eighteen. Everyone was taken safely aboard.


As a result of the fire, the air traffic was shut down for several hours. From 16. 30 hours Dutch time it was resumed.