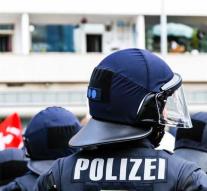 aschaffenburg - Special units of the German police have stormed a building in the town of Aschaffenburg and arrested an armed man. The former employee of the company in the building was there...

It was a 60-year-old man who had been dismissed by the company. He stepped into the building at 8:00 am and threatened two women with a gun. The women were able to leave the building after about two hours after which the man entrenched himself. Around noon the storming followed and the man was caught.

The women remained unharmed but in shock. The man was bitten by a police dog when he was arrested and ended up in the hospital.