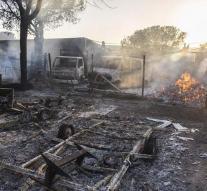 moguer - Due to a high forest fires in southwestern Spain, people around the year 2000 have been put to safety. In the vicinity of the municipality of Moguer in the Province of Huelva, two campsites, two hotels and some small villages were evacuated. The most dangerous fire front now threatens Doñana National Park.

The fire broke out on Saturday afternoon. The cause is unknown, but ignition or negligence is not ruled out. The smoke was seen from a long distance on Sunday. Roads through the area have been closed and so far no dead or injured have been reported.

The regional government of Andalusia announced that more than 550 firefighters and soldiers were fighting fire with dozens of land vehicles, eleven planes and ten helicopters. The extinguishing work is hampered by a hard, hot wind that blows in ever changing directions.