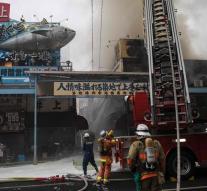 tokio - On Tsuiji, the largest fish market in the world in Tokyo, a fierce fire broke out on Thursday. Every year tens of thousands of tourists visit the market full of stalls with exotic fish and sushi.

The fire originated at five o'clock in the afternoon, local time, in an outdoor area full of restaurants. The emergency services are extensively wrecked. About thirty fire trucks have been deployed and dozens of firemen fight the flames. The fire is difficult to fight through the narrow streets.

The inner part of the eighty-year-old market, where fish stocks are held and tuna auctions are held, has not been affected. There are no reports of victims yet.