Home / World / Fire on the Côte d'Azur under control 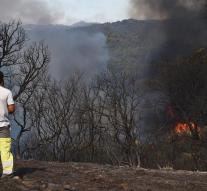 le lavandou - The forest fires at the town of Bormes-les-Mimosas on the French Riviera are under control, reported French media. The fires have laid about 1700 hectares in the ash since Monday. In the night of Tuesday on Wednesday, 12,000 people had to be evacuated, including many hotel guests and 3000 campers.

Drought and wind remain an obstacle to fire extinguishers. In the interior of the same department of Var, a fire threatens the Seillons-Source-d'Argens site. But here too, the fire seems to be congested.

West of Marseilles fires forest fires in the municipality of Martigues where two teenagers were arrested on suspicion of fire. In southern France and Corsica, more than 7000 hectares have been set in flames since Monday.