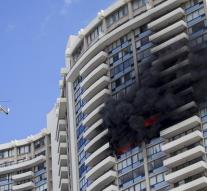 honolulu - In a 36-storey flat in Honolulu in the state of Hawaii, a fire broke out on Friday night. According to CNN, three people died. They were found on the 26th floor, where the fire broke out. Police and firefighters would go all the doors in the flat, looking for victims.

The fire rages according to local media in the Marco Polo building on Kapiolani Boulevard, where 568 apartments are located. Several people were stuck in their apartment, while sixty firefighters attacked the fire. Helicopters circle around the towers.

On social media, periscope images can be seen from the skyscraper, where the flames go out. Several injuries are treated on site. They have, among other things, breathed in smoke.