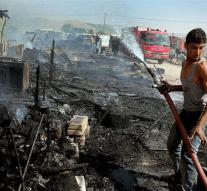 beirut - In a refugee camp in the Lebanese Bekaa Valley a large fire broke out on Sunday. Feared for victims, according to security officers.

It is a camp with refugees from Syria at the place of Qab Elijah. In Lebanon, at least one million displaced people from Syria are living in improvised camps throughout the country.