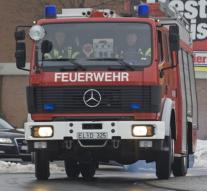 hamburg - In a reception center for refugees in Germany Rosengarten, near Hamburg, was Tuesday night fire broke out. Certainly twenty asylum seekers could reach safety in time, police said. It is not known whether there were injured and whether more people were in the building.

The fire broke out according to the first reports on the first floor off. Making it happen is still unknown.

In Germany, more fire broke out in refugee shelters. Not infrequently, it appears that the fire is lighted.