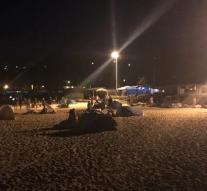 bormes - Tourists in southern France hit the night on the beach. They choose a safe spot in the sand, next to the sea.

In the night of Tuesday on Wednesday, there were certainly 10,000 residents and campers evacuated by the south. For some holidaymakers, like some English tourists, it is already the second night in a row in the open air.

Tour operators provide emergency shelter and alternative accommodations if their customers are to be evacuated. Others prefer to have a tent on the beach.

Telegraph. Les Jurgen Oskamp is in southern France and sends us this photo of tourists who set up their tent on the beach.

In southern France and Corsica, there have been numerous forest fires since the beginning of the week, due to the strong wind and drought.

It is estimated that thousands of Dutch tourists currently live in southern France.