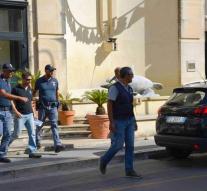 ragusa - A firefighter in Sicily started firing fire for the purpose of extinguishing wages before extinguishing. This charge made the police known in the Sicilian district of Ragusa on Monday through the Italian press office ANSA.

The fifteen volunteer firefighters of the team quit the charges and then called the emergency number. For extinguishing the fire they were paid about ten euros per hour. The case came to light when the central fire department of the region noted that the team was striking out for fire. In the summer forest fires occur in Italy and other parts of southern Europe a lot.

With the help of his team, the team leader went out with his van to launch fire. Most firefighters would have known their complicity in the fraud, which took place between 2013 and 2015. The team leader has been arrested and placed under house arrest.