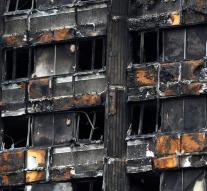 london - The London Fire Department warned all 33 local city councils in May for the use of flammable sheets that cover flats. That reported the BBC Wednesday.

The fire brigade came with the warning after fire investigation in August. This showed that plates made of polystyrene and plywood were likely to cause fire distribution.

At the fire in the residential tower Grenfell Tower in London's Kensington on June 14, the facade boards are seen as the cause of the fast-paced spread of the fire. Due to the huge fire that occurred, at least 79 people lost their lives.