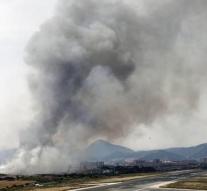 huelva - The forest fire along the coast at the southern Spanish city of Huelva is under control. This has revealed the fire department. The fire broke out due to unknown cause. Two hotels, two campsites and some villages had to be evacuated. The fire also threatened a unique natural area, the Doñana National Park on Sundays.

In total, approximately 2000 people have been evacuated. Everyone can now return according to the authorities. The regional government of Andalusia announced that more than 550 firemen and soldiers were deployed to fight the fire, using eleven aircraft and ten helicopters.