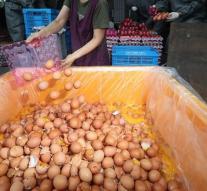 tallinn/brussels - The fipronil scandal is increasingly taking place. Meanwhile, eggs in 45 countries have been infected with eggs or egg products since last summer it was discovered that the drug in the Netherlands and Belgium was used illegally to kill blood lice in chicken stables.

In 26 of the 28 EU countries traces of the insecticide have been found, a spokesman for EU Commissioner Vytenis Andriukaitis (Health and Food Safety) said Tuesday. Only Lithuania and Croatia have not received a notification yet. The substance has also been found in, among others, the US, Russia, South Africa, the Netherlands Antilles, Turkey, Iraq, Norway, Israel and Canada.

The Ministers for Agriculture of the 28 Member States discuss the issue of Tuesday in Tallinn, the capital of temporary EU President Estonia.