Home / World / Finns on the streets against neo-Nazis 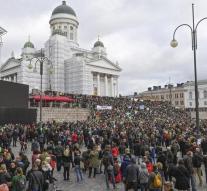 - Throughout Finland Saturday, thousands of people took to the streets to demonstrate against racism and violence. With the slogan ' it is enough '' were alone at the Senate Square in the capital Helsinki 15,000 people gathered.

The occasion was the death of a 28-year-old man who was beaten up by neo-Nazis and on September 16 died as a result of his injuries. He would be mistreated by members of the right-wing extremist Finnish Resistance Movement after he right in front of a group of neo-Nazis had spit on the ground.

The Finnish Prime Minister Juha Sipilä took part in a demonstration in Kuopio, 340 kilometers northeast of Helsinki. He promised there will be more measures against right-wing extremism.