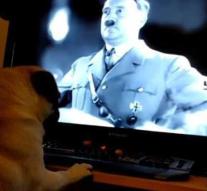 glasgow - A Scottish man who trained his girlfriend's pug to do the Hitler salute and to respond to Nazi texts, was sentenced to a fine of more than 900 euros, because he put a film of the scene on YouTube. According to the defendant, it was meant purely as a joke and the ruling limits the freedom of expression. This reports the BBC.

30-year-old Mark Meechan taught his girlfriend's pug to put his paw in the air when he says 'sieg heil'. He also trained the animal to respond to the sentence 'gas the jews' ('gasp the Jews'). In 2016 he put a video with the reactions of the dog on YouTube. The video soon became a hit on the internet and more than three million views.