Home / World / Fine for Italians to worry about airplane 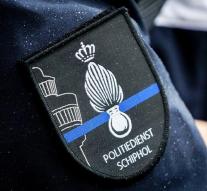 amsterdam - At Schiphol, thirteen men were detained during the flight of Naples to Amsterdam on Sunday. The airline reported to the Royal Marechaussee that the men caused inconvenience during the journey and showed annoying, aggressive behavior.

The marechaussee awaited the group, Italians between 25 and 30 years old. After consultation with the Public Prosecutor, they were given a fine of 150 euros after each thirteen, after which they could leave. The marechaussee suspects that the Italians in the Netherlands were celebrating a bachelorette party.