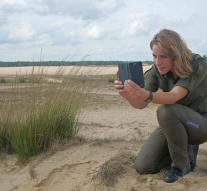 - Nature monuments and Facebook show on September 21, the first day of autumn, the most beautiful Dutch autumn phenomena during a twelve-hour Facebook Live marathon: HerfstLive. From sunrise to sunset, viewers can take a trip from the Veluwe heath to the Limburg Sint Pietersberg.

The organizations want to inspire and encourage people to start this fall on their own. 'Dutch nature is so beautiful and diverse in autumn that we want to make all Dutch feel excited about experiencing it. Facebook Live gives our forest guards the opportunity to show people the most beautiful places and inspire them to pull themselves out, using live video, 'said Inge Reijnen, a forerunner.

Starting at 7:00, HerfstLive starts from the Facebook page of Nature Monuments. 'In the early morning of September, Veluwezoom National Park is the' burlen 'of the bronze deer deer, a great way to wake up,' says Reijnen. 'Later in the day we go live from the back of a sheep with the sheep shovel at the Dwingelderveld. That will feel like you are part of the herd. '

Below the schedule of HerfstLive: