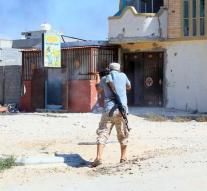 sirte - The final offensive that (IS) have used pro-government militias against Libyan fighters from Islamic State in Sirte have their Sunday claimed at least 34 men. Another more than 180 pro-government fighters were injured, according to a casualty list of field hospitals.

Sirte was considered the unofficial capital of IS in Libya and as a possible refuge, the movement in Syria and Iraq was allowed to come very cornered. Since they attack in May in the coastal town government forces have however managed to reduce house to house and street to street the extremists. Since the beginning of this month, they also receive air support from the United States.

The last IS fighters in Sirte have barricaded themselves in a neighborhood in the center of town. They defend tooth and nail. The government troops, the bulk coming from Misrata, progressing slowly. They constantly encounter landmines and must defend itself against suicide bombers and snipers.


Sunday alone tried five IS-combatants to inflate and thereby to drag the dead with their opponents. The Misrata brigades speaking,, a desperate attempt to disrupt the march. '

The battle for Sirte Sunday flared up again after several days of relative calm. The city's besiegers did a stop to the women and children of IS fighters the chance to find a safe haven.