Home / World / Fillon made most impression in debate 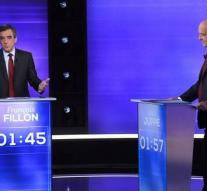 - Francois Fillon has made the biggest impression according to a poll Thursday in a final debate between the two remaining conservative candidates for the French presidency. The former prime minister defeated his rival of Les Républicains Alain Juppé clearly.

The research Elabe reported that 71 percent of the conservative and center-right voters preferred Fillon. Overall found 57 percent of viewers, whatever their political color, it more than Juppé. The presidential election in France next year.

Sunday will decide who the party moves forward. Former head of state Nicolas Sarkozy was already finished before.