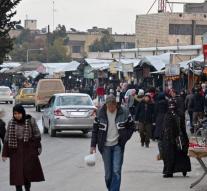 beirut - Despite some incidents shortly after the start, seems to hold the file in Syria. The Syrian Observatory for Human Rights reported Friday that 'persists rest.'

Immediately after the start of the cease-fire Thursday at 23. 00 pm Dutch time there were reports of fighting between rebels and Syrian government forces in and around the Hama province. But during the rest of the night was quiet.

An official with the rebels of Jaish al-Nasr reported that there were some shelling throughout the night but that they were stopped. 'Until now, the situation is good. '

The file was created at the hands of Russia and Turkey.