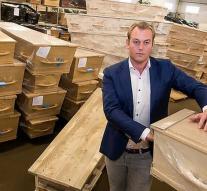 amsterdam - Funeral Service Netherlands, leader of coffins and hearses, threatens, blackmails and is guilty of mafia practices. This enables the management of Uitvaart24, a new online prize fighter in the funeral business. 'He shouted,' You will from tomorrow no case more! ' '

The allegations of serious harassment were made yesterday during a lawsuit which was filed by Funeral Service Netherlands (RSN) against Uitvaart24.

Deployment of the lawsuit is the exclusive contract with RSN for the purchase of coffins and funeral transport, where the fast-growing funeral attendant Uitvaart24 want from it. This is against the wishes of RSN, which now demands through the courts that the contract is respected.


Anne Wieb Wijnsma and Jan-Jaap Palma, the directors of Uitvaart24 his own words threatened in recent months and blackmailed by Arno Damhuis, owner of RSN. 'It's pure mafia' Wijnsma whispers during a suspension. According runs them Damhuis moreover- secretly through front men- several competing funeral homes, which is considered a downright shame in this closed branch. Wijnsma waving in the courtroom with a statement which lists all companies and straw men.

Damhuis claims in turn that the men of Uitvaart24 business secret information about him 'leaked' to Dela, the largest funeral insurer in the Netherlands and an important customer of RSN.

'I was about to conclude a contract with Dela 15 million in coffins. But when the chief procurement proved there fully aware of my involvement in the building of a new crematorium in Almere. They had all secret documents in hands. I was shocked. Competition from a supplier is not tolerated by Dela, they chop it off my head, 'Damhuis explains the seriousness of the situation to the court.


The RSN CEO says sure that Wijnsma and Palma have betrayed him in Delaware, and threatened revenge all services to stop them immediately. 'If he calls on Sunday morning you get from no more chest and I stake all transport ', while Monday to arrange several funerals, you sleep badly, Madam Judge,' Palma says, his voice breaking. Employees are even 'recruited' to come to work in the farms of RSN. 'We do not go with him,' Wijnsma nods to Damhuis.