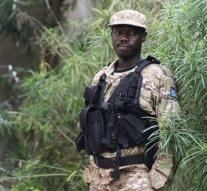 juba - The fighting in Juba, capital of South Sudan, are flared Monday morning at first light. The soldiers of the rivals President Salva Kiir and Vice President Riek Machar went to another body for the fifth consecutive day.

Despite the insistence of the United Nations and the United States last weekend, the fighting resumed. An estimated 272 deaths are due.

The fight has both political, economic as a tribal background. Five years ago, South Sudan became independent. Kiir, belonging to the Dinka tribe, became president. He fought the great enemy, the Nuerstam. The end of 2013 he fired among others Vice President Machar of Nuerstam, after a two-year bloody civil war broke out. Not long ago turned the rest back, but UN observers increasingly feared that the fight would flare up.