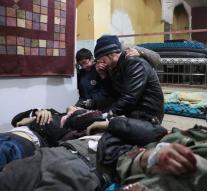 beirut - From Syria arrive Friday morning reports of fighting in spite of the file that is in force. According to the Syrian Observatory for Human Rights, there were clashes between the Syrian army and its allies with rebels north of the capital Damascus.

The Syrian army would thereby have deployed helicopters. Also rebels in the area reported fights. it will be quiet in the rest of the country.

Thursday evening 23. 00 Dutch time was a file of force which has come about at the hands of Russia and Turkey.