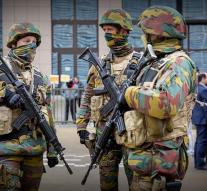 brussels - The Belgian army has about fifty soldiers with extremist sympathies. They will not be fired as long as they do anything criminal, but military intelligence keeps an eye on them.

Of which groups they belong Defence is not to say, but according to the newspaper it comes to Salafists, neo-Nazis or members of motorcycle gangs. Four soldiers were members of the Belgian section of Soldiers of Odin, a Scandinavian vigilante association. The Ministry of Defence is not happy about this, but is bound by the constitutional freedom of association.


Several years ago, the selection procedures were tightened to ban people with radical views. The army working 32 000 people, of whom 30 000 soldiers.

The Dutch army is no place for Salafists, Hennis said Minister of Defence last year.