Home / World / Fifth attack in Europe in half year time 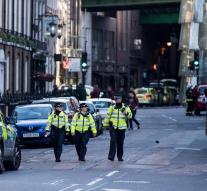 london - There is an icy silence around London Bridge and Borough Market. The eight bells of St Paul's are hanging above the Thames water. Like a Sunday morning, but now everything gets more meaning after another attack. The attack on Saturday night in London is the fifth within six months in Western Europe. In three cases, the attack took place in England. Four times a car was used as a scavenger.

It started in December last year with the attack on a Christmas market in Berlin when the perpetrator from Tunisia killed 12 people. The terrorist was shot shortly afterwards in Italy. On March 22, a man rode on pedestrians on the Westminster Bridge in London. As a result, four people died. The perpetrator was shot dead. On April 7, a terrorist in the Swedish capital of Stockholm used a truck to drive in on passers-by. Five people died on the street. The perpetrator was arrested.

On May 22, a man blows up immediately after a concert of American singer Ariana Grande. He took 22 bystanders in death. Due to the London attack, Sunday morning at least six people were killed by the three perpetrators. As some injured are bad, this amount may still increase. The perpetrators are shot dead.