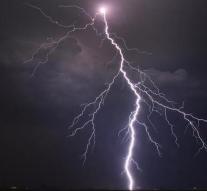 azerailles - At a music festival in the town of Azerailles in northeastern France, fifteen people are hit by lightning on Saturday. Two victims are at risk of living, reports French media.

A woman of around sixty years and a 44 year old man is in a bad state. According to regional authorities, they were burned out.

The lightning found among other things a tent in which people were sheltered because of the weather. Among the victims are also children. After the emergency services had provided first aid to the festival, the victims were taken to the hospital.