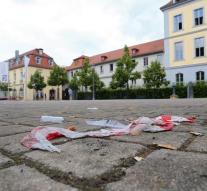 ansbach - When the bombing Sunday in the Bavarian Ansbach fell fifteen wounded. Four of them are seriously injured, but are not in danger. This said, a police spokesman said Monday. The number of injured was previously set at twelve.

The perpetrator was a 27-year-old Syrian who took his backpack with explosives and pieces of metal exploded at the entrance of a music festival. He was killed.

He was a rejected asylum seeker who may be deported soon to Bulgaria. The perpetrator was two years ago, came to Germany. He was due to drug crime known to the police. He was mentally confused and did earlier two suicide attempts.