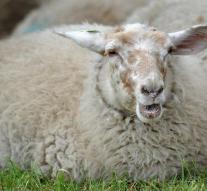 bordeaux - A sheep was going berserk, has near the southern French city of Bordeaux attacked a 94-year-old man and knocked down. The Sud Ouest newspaper reported Tuesday that the man was deceased from his injuries.

The man had wounds all over his body, especially on his face and a knee. The incident took place in Cestas, south of Bordeaux. It is unclear why the sheep attacked the man. The animal had a reputation for being aggressive. The sheep also wounded and killed.