Home / World / Fierce opposition from IS at border Turkey 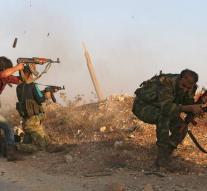 - Warriors terrorist organization Islamic State in northern Syria offer fierce resistance in battles with rebels backed by Turkey. That said, the Turkish army Wednesday. Turkey sent troops almost two months ago to oust the border to IS from the border region.

With the support of Turkish tanks and warplanes, the rebels have advanced in recent times towards Dabiq, a stronghold of IS. According to the Turkish army, the last 24 hours 47 IS fighters slain. 'Because of strong opposition from IS there is no progress made in the planned recapture of four places,' said the military.