Home / World / Fierce fighting rebels and IS in Aleppo 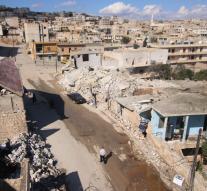 aleppo - North and east of the Syrian city of Aleppo fierce fighting has erupted between rebels and fighters of terrorist organization Islamic State (IS) . Grenades rebels have fallen into the district al- Ashrafyyeh in Aleppo . The place al- Qebba , east of Aleppo is by IS bombarded with explosives .

IS is making advances toward the northern Syrian city. The movement has a dozen places around the town recaptured by rebels and rival Islamist movements. Dozens of fighters have thereby been killed, the Syrian Observatory for Human Rights reported Saturday. Aleppo is partly owns the regeringsleger. Rusland east of Aleppo air attacks on targets of IS at the airbase Kweris, according to the observatory. The military base is in the hands of government forces.