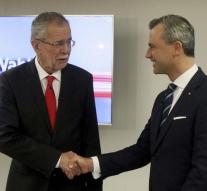 - The two candidates for the Austrian presidency have each Thursday night in the last debate before the vote on Sunday fiercely contested and include called a liar.

The leftist candidate, ex-leader of the Greens, Alexander Van der Bellen and Norbert Hofer of the right-wing populist FPÖ (Freedom Party of Austria) were in 'the dispute' not agree on anything except that they both would demolish the birthplace of Adolf Hitler.

Austrian media reported Friday that the two were trying to make another black person. The moderator had trouble keeping the presidential candidates in the presented topics.

Around 6.4 million Austrians choose their head of state Sunday. In May Van der Bellen won narrowly, but there seemed to have gone wrong with the enumeration of some of the voices. The next attempt was canceled in October because ballots were found not valid.

The 45-year-old would Hofer Sunday as the first winner of the current right-wing populists in Western Europe, kicking the head of state. His rival, the 72-year-old professor Van der Bellen economy. The Dutch-sounding name is a legacy of his ancestors who emigrated in 1700 from the Netherlands to Russia. After the revolution of 1917, the family fled Russia and moved to Germany and later Austria.

Van der Bellen has announced as president to block any government led by Freedom Party leader Heinz-Christian Strache. Strache applies unlike Hofer as an extremist who as a teenager hanging around in right-wing extremist groups. The Austrian Federal President holds a ceremonial function, but should inaugurate the Prime Minister and may dismiss the government.