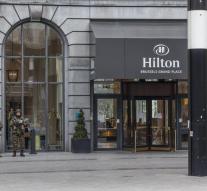 brussels - Belgium is the number of soldiers patrolling the streets phasing out, from 1800 to 1089. That the government decided, let's spokesman Minister Jan Jambon (Interior) know Friday. Threat level 3 on a scale of 4, is maintained.

It is also intended that the military does not permanently protect potential targets, but keep moving. In recent months, has already worked with these ' patrol targeted 'methodology. ' Because fewer people are coming up, we can do the same work with fewer soldiers. '' In practice, it is still yet to 1250 men, the spokesman said. The measure is effective immediately.

Since the attacks of March 22 in Brussels can be seen at many strategic locations of soldiers, both in the Belgian capital and in other cities. sound from the army for some time sounds of excessive workload and lack of capacity.